Home to World Heritage
Shingu, the central city of the Kumano

A city caught between Myth and Modern Day

Shingu lies on the southern end of the Kii Peninsula, south of Kyoto and Osaka in Wakayama Prefecture. It has a warm climate and is surrounded by both the coast and mountain ranges, with winding rivers interspersed between, making it a region abundant in natural beauty.
The region surrounding Shingu was once called Kumano. The main river flowing through Shingu is the Kumano-gawa River, and the ocean off the city's coast is called the Kumano-nada Sea.
Shingu is the traditional home of the Kumano faith, which is rooted in the worship of nature and has been followed and passed down for centuries. The Kumano Sanzan (the faith's three Grand Shrines) and the Kumano Kodo (the pilgrimage routes travelled since ancient times between these shrines) were listed as a UNESCO World Heritage Site in 2004 under the name “Sacred Sites and Pilgrimage Routes in the Kii Mountain Range.”
In Shingu, World Heritage Sites like Kumano Hayatama Taisha Grand Shrine, Kamikura-Jinja Shrine, and Asuka-Jinja Shrine are melded into the everyday lives of the locals. Visit and see how the ancient and the sacred exist alongside the modern aspects of the city.

The History of Shingu, the Heart of Kumano

Shingu is an ancient city that first appeared in the 8th century book "Kumano Kannomura". It is said that around 2200 years ago, Jofuku, a Chinese scholar who served the First Qin Emperor of China, came to Shingu after being ordered to search for the elixir of life.
The Kumano Sanzan were important and sacred places to the Japanese imperial court. In the 9th-12th centuries, stewards were appointed to oversee the shrines. From the Heian era (794-1185) to the Kamakura period (1185-1333), the retired Emperor and the aristocracy made the Kumano pilgrimage, visiting the area to pray at the three Grand Shrines. Shingu, where Kumano Hayatama Taisha Grand Shrine is located, prospered as a result of the pilgrimage's popularity.

Starting from the beginning of the Edo Period, whaling became commonplace in Shingu, and a series of stories related to the whaling culture of the area, Kujira to Tomo ni Ikiru or Life with Whales, were recognized by the Agency of Cultural Affairs and registered as a Japanese Heritage piece in 2016. In the Meiji era (1868-1912), Shingu was well known for its production of cedar and cypress lumber. As the largest city in Kumano it was the cultural center of the area and is the birthplace of several modern writers and other notables, including Haruo Sato and Isaku Nishimura. 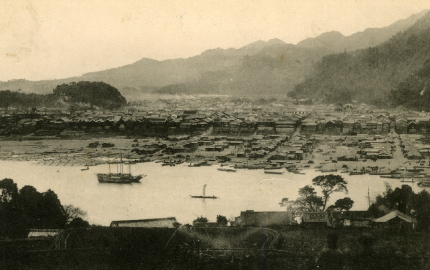 A novelist who authored poems and other works. Born in Shingu as the heir of a medical clinic that ran back nine generations. His old residence has been relocated and opened up as "Sato Haruo Memorial Hall" nearby Kumano Hayatama Taisha Grand Shrine.

The founder of Bunka Gakuin, an academy that specialised in liberal education. His home (now known as the Former Nishimura Residence) completed in 1914 had become a gathering place for poets like Akiko Yosano.

Children's song writer. Graduated from the prestigious Tokyo Music school in 1896. After becoming a music teacher, she created famous works like the children's song "Dove Poppo" with composer Rentaro Taki. There's a statue celebrating her achievement in front of JR Shingu Station.

A novelist who organised the annual lecture "Kumano University". He won the Akutagawa Prize (a prestigious literary award in Japan) in 1976 for his work "Cape", inspired by his vision of the world from Shingu's narrow streets.

NEXT
To enjoy history, culture and the nature of Shingu
Kumano Sanzan Kumano Kodo